Juliana Eades, who built the New Hampshire Community Loan Fund from an idea into a nationally recognized lender on behalf of disadvantaged people, communities, and businesses, will retire as its President June 30.

Juliana Eades, who built the New Hampshire Community Loan Fund from an idea into a nationally recognized lender on behalf of disadvantaged people, communities, and businesses, will retire as its President June 30.

The announcement was made today by Community Loan Fund Board Chair Thomas Bunnell and Eades.

“I am so proud of all the opportunities that people have realized with our capital and training over the last 36 years,” Eades said. “I have thrived in the great team spirit of staff and board over that time. I am grateful for the support of investors, donors, and partners who have made so many homes, jobs and child care spaces possible.”

Eades was hired in 1984 as the Community Loan Fund’s first employee. Its office space was in the basement of the New Hampshire Charitable Foundation.

Since then the organization has loaned $350 million for nearly 10,000 affordable housing units, 3,800 jobs and 4,400 child care spaces in N.H. that wouldn’t otherwise have gotten financing. 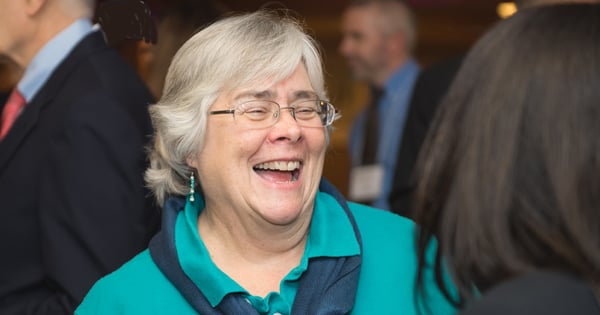 Under her leadership, the Community Loan Fund became known nationally for innovation, especially for cooperative ownership of manufactured-home communities, a strong base of individual investors who supply the organization’s loan capital, and job growth through royalty financing for small businesses.

Along with this breadth of lending, the Community Loan Fund has made loans in every county and most towns in N.H., in small and large amounts, and for both ordinary necessities and inventive expansions.

Eades said the 12-week sabbatical she took in February allowed her time to reflect on her life and work at the Community Loan Fund. During those months, the organization was led by Acting President John Hamilton and a leadership team that steered it not only through the normal course of business but also through the onset of the pandemic-related economic disruptions.

“The Community Loan Fund is in a very stable place, with strong leadership, a great board, excellent staff, and robust strategic direction, making this a graceful time to retire,” Eades said.

The Community Loan Fund had prepared for years for her transition. Its board created a comprehensive, best-practice succession plan, a goal of the organization’s strategic plan. Other steps included Eades choosing and mentoring a talented and committed leadership team, positioning the organization as financially strong and operationally adaptable so it would weather recessions and economic disruptions, deepening its impact and mission by doubling the lending portfolio to more than $140 million, and using its organization-wide sabbatical program to deepen bench strength on all levels of the organization while developing up-and-coming leaders.

“On behalf of the Board of Directors, I want to thank Julie for her invaluable leadership and contributions not just to the Community Loan Fund, but to the state of New Hampshire,” said Bunnell. “I am confident in the strength of this organization, the staff leadership, and all our supporters and borrowers. Making this a seamless transition is our way of honoring Julie’s wishes and her 36 years of dynamic leadership.”

“We all wish Julie the best as she creates the next era in her life,” he said.

Bunnell said Hamilton will continue as Acting President for the Community Loan Fund as the board creates a process for finalizing the role of President. Hamilton will continue to exercise all the duties he has had in the chief executive role since the start of Julie’s sabbatical, providing continuity and allowing the organization to operate seamlessly. The board has convened a transition committee to guide its exercise of due diligence related to executive transition and the organization’s presidency.

Hamilton was hired early in 1988 as the third Community Loan Fund employee. Two years later, he left as founder of the Concord Area Trust for Community Housing (CATCH) which was incubated under his leadership while still with the Community Loan Fund and he continued in that role for seven more years. He returned in 2000, after three years of public sector leadership for renewable energy and workforce development, to lead the expansion of the business finance and job creation programs.

His 22-year tenure includes his being Vice President of Economic Opportunity, overseeing innovation and product development in all areas, resource development, and serving as liaison to national partners and on the senior management team.