A group of Portsmouth, N.H. residents is appealing to the public to help them revitalize their neighborhood and add much-needed affordable workforce housing.

A group of Portsmouth, N.H. residents is appealing to the public to help them revitalize their neighborhood and add much-needed affordable workforce housing.

Woodbury Cooperative (formerly Ward’s Park) is a resident-owned manufactured-home community located a few miles from downtown Portsmouth, close by the Woodbury Avenue shopping strip. The community contains 15 homes, some of which are abandoned, and a vacant commercial building and garage.

The residents bought the community in 2016 to avoid the potential closure of the park and the loss of their affordable homes. 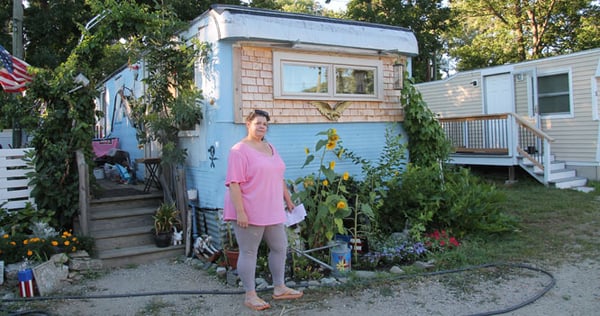 Lack of planning when the park was originally built produced a hodgepodge of buildings and no access for safety vehicles. Co-op President Leslie Williams says when one of the homes in the co-op caught fire, firefighters had to go through a neighbor’s yard and take down part of a fence to get to it.

“It is narrow and a hazard for them to try to get in. To get everyone out if there was a big fire would be a problem,” said Williams, who has lived in the neighborhood for more than 20 years.

The engineering plan calls for removing all of the vacant buildings in the co-op and adding four new homes, substantially widening the access road to make it accessible by emergency vehicles, and upgrading the water and sewage lines.

The co-op’s board of directors has worked for years on the $1.3-million project, with the assistance of the New Hampshire Community Loan Fund.

Given the age of many of the state’s manufactured (mobile) home parks, this type of project isn’t unusual, said ROC-NH Director Tara Reardon. What is different is, because the cooperative is located in Portsmouth, the project doesn’t qualify for a Community Development Block Grant or other federal funding.

Instead, the Community Loan Fund is trying to raise $500,000 in donations from citizens and institutions to finance the project in a way that doesn’t increase the Woodbury homeowners’ already-high lot rent (the fee homeowners pay for use of the land under their homes).

Williams and other residents feel like time is running out on them. “There probably won't be people left because of the way the place looks,” she said. “Many of the homes are boarded up. Anyone that's looking to possibly move out can't even sell. They just up and leave and we're left with their broken-down homes.”