Vacancies down to zero. Check.

Greenville Estates Tenants Cooperative in Greenville is what the light at the end of the tunnel looks like for resident-owned communities. 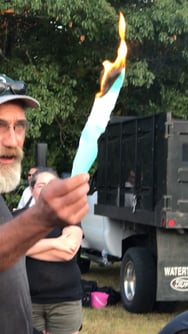 The co-op paid off its mortgage last spring and immediately lowered lot rents by $35 a month. Then it threw itself a mortgage-burning party.

For one afternoon this fall the community’s back field was covered by tents, bounce houses, a dunk tank, an inflatable double slide and an obstacle course. Volunteers cooked and served food and children painted their faces and decorated their bikes, while raffles, a deejay and a resident who sings professionally entertained for hours.

“We thought the perfect thing to do was to celebrate burning our mortgage and 30 years of being a co-op,” said treasurer Christine Deane. “It was the best money we could have ever spent, because everybody deserved it and it brought everybody together. People we had not seen at any events in years came out.”

The turnout reflected the efforts of a social committee that is constantly creating events to unite the community. They organized holiday-themed gatherings, parties to make cards and wreaths and learn dot painting, chili and soup cook-offs and an Easter egg hunt. The committee also raised money for the two families who lost their homes to fire in 2019.

Bringing people together to celebrate also resulted in more engagement in the community. A couple weeks after the mortgage-burning, the co-op’s “dumpster day” brought out some new helpers.

The co-op started dumpster days a couple years ago to beautify the community and help residents who had large items they couldn’t otherwise dispose of. On one day in the spring and in the fall, the co-op rents four large dumpsters. Volunteers go around the community with a truck to pick items up for elders and residents who can’t be there that day.

“People can bring down just about anything they want,” Christine said. “It keeps everybody’s yards picked up and if they don’t have a truck or the physical ability to do it, we do it for them and the co-op pays for it.” Residents pay only for items, like televisions and appliances, that the recycling center charges to dispose of.

Although Greenville’s directors are term-limited to two one-year terms—they can run for office again after sitting out a year—Christine says the board in recent years has been “incredibly great.”

“Nobody’s on the board for themselves,” she said. “Everybody’s on it for the good of the co-op.”

All of which makes for an attractive and affordable community. The co-op is doing so well that houses that go on the market sell within a week or two, and—amazingly for such a large community—months can go by without even having a house on the market. The co-op office gets calls every week asking if anything is open.

Her dream is a building that would serve as a clubhouse, where residents could host baby showers and family get-togethers and the co-op could hold its board and membership meetings.

It’s all about bringing neighbors together. That’s what makes a co-op strong.

Steve Varnum is the Community Loan Fund's Director of Communications and Marketing.