The Juliana Eades Fund will give the Community Loan Fund the flexibility to continue to innovate and support the people that she devoted her life’s work to.

When Julie Eades retired in June after 36 years as the New Hampshire Community Loan Fund’s founding president, her peers and staff praised her entrepreneurial spirit and innovative mind, her humanity, and her ability to attract, inspire, and nurture leaders.

Most of all, they applauded the impact of her work on the lives of thousands of people with modest incomes. 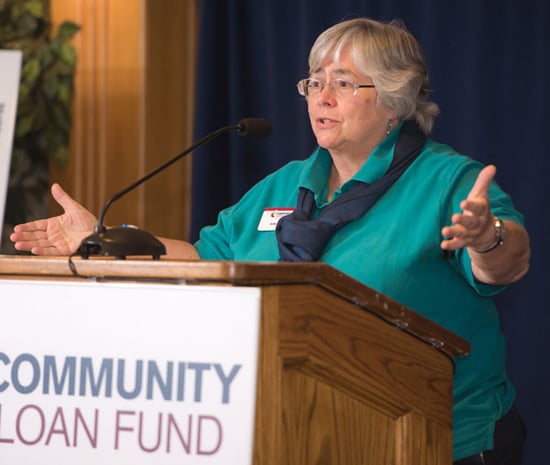 Yet somehow it felt like those accolades only scratched the surface of what she has meant to the Community Loan Fund, to the opportunity lending movement she helped birth and grow, and to the people we serve.

Julie’s career was driven by a powerful belief that people, families, and communities that are invisible in our society should have access to the same opportunities as do others. As she often said, “We want people with no pockets to be able to act like people with deep pockets.”

She also believed that one of the Community Loan Fund’s most important products was a sense of possibility. Possibility that people with low and moderate incomes ould own a home, grow a business, or democratically manage a 150-home community.

That commitment led her and her team to create, test, and deliver numerous products and programs that encouraged people to grasp those opportunities using the self-help tools of loans and education.

Over time, our borrowers’ successes bent financial markets to better serve them. An example is that banks considered the first ROCs too risky to lend to. Now, banks are willing—and welcome—lending partners when residents organize to buy their parks.

They also attracted the interest of major national funders, including the Ford Foundation, that thought the ROC concept could be replicated across the country. The idea to expand the Community Loan Fund nationally was floated. But this organization was built on homegrown, local, solutions, and fueled by local people—neighbors who were willing to use their financial means to help their neighbors and trusted us as stewards of their money.

So instead, Julie not only spun off a separate nonprofit social venture, ROC USA, she gave ROC USA staff from what was then our manufactured housing park program along with all the material that program had created.

Among her many accolades, Julie was honored in 2012 by the national network of CDFIs, the Opportunity Finance Network. She was awarded the Ned Gramlich Award for Responsible Finance for advancing the industry’s core values of social, political, and economic justice.

Just days before her retirement she also received the New Hampshire Women’s Foundation’s Trailblazer Award; fitting, because one of her proudest accomplishments was having hiked the entire Appalachian Trail.

We are honoring Julie, her spirit and accomplishments, by creating a permanent Juliana Eades Fund. Donations will give the Community Loan Fund the flexibility to continue to innovate and support the people that Julie devoted her life’s work to.

John Hamilton is Acting President of the Community Loan Fund.

Learn about other ways to support our work.