What a year it was!

It takes a community. Sometimes, several communities pulling together.

That's the story of the New Hampshire Community Loan Fund's 2019.

Because of the support of our various tribes--donors, investors, and  partner organizations--we wrangled the largest deal we’ve ever done, launched an innovative project to move veterans from transitional housing to homes in resident-owned communities, surpassed 10,000 affordable homes created or preserved, sent longtime child care financing director Julie McConnell to retirement with a well-deserved honor, and saw our president, Juliana Eades, named one of the state’s most influential business leaders.

Here’s how it went:

On the day before Thanksgiving, 2018, more than 1,000 New Hampshire homeowners learned that their four manufactured-home (also called mobile home) parks were being sold. The corporate owner planned to sell them to a Michigan company, the country’s third-largest park conglomerate. Watch the clip below from John Oliver’s Last Week Tonight  (be advised: adult language) to understand why the homeowners felt threatened.

Because New Hampshire had passed a “60-day notice law” 30 years earlier, the homeowners had two months to negotiate with the park owner and decide whether they wanted to buy their communities.

The total price tag, more than $60 million, was daunting enough. But the homeowners were also paying some of the highest lot rents (the fee for the use of the land under their homes) in the state. A segment of John Oliver's show, Last Week Tonight, captured what these homeowners were up against.


Our goal was to help them buy the parks with financing that would raise their rents only slightly, if at all.

All four resident cooperatives voted to try to purchase their parks, and in July, after several months of intensive work, co-ops in Keene, Conway, and Allenstown became resident-owned communities (ROCs). The fourth park sale stalled after the discovery that 26 of its 138 home lots were either in a floodway or flood zone.

The final combined purchase price, close to $48 million, made it the largest deal in the Community Loan Fund’s 36-year history, and a triumph of collaborations that involved the residents, town governments, state agencies, local and national funders, impact investors and, as always, our donors and investors.

Helping preserve the nearly 900 homes in the three ROCs, combined with our Welcome Home Loans, and a loan for a housing complex in Littleton, pushed us past the milestone of 10,000 affordable homes created or preserved in N.H. with our funding.

Housing continues to be a major issue in N.H., and with the help of our donors and investors, we have no intention of slowing down.

It was a great morning in August when we gathered with dozens of friends and partners, including Congressman Chris Pappas, at Rock Rimmon Cooperative in Danville to celebrate the first homeowners in our Veterans First project. Watch our video about the project below.

The second veteran to move in was Peter “Searching Owl” Giove, a Vietnam vet who was homeless after losing his house to a fire. “This is perfect, really,” he said. “I have everything I need to have balance in my life.”


The seed for the highly collaborative project was planted when Community Loan Fund staff learned that veterans couldn’t leave supportive housing because there were no affordable places to move to. “These veterans deserve better housing opportunities,” said President Juliana Eades.

As neighbors, these new homeowners will enjoy the support and similar life experiences of their fellow veterans. The co-op, which prepared the sites for the new homes, will also benefit from fuller occupancy of its community, which will strengthen its finances and make all of its 77 homes more affordable for the long term.

As of the end of January, four veterans were in their new homes and another three were working through the loan process. 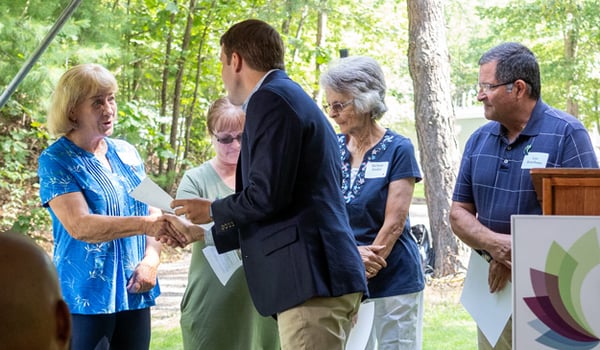 Each veteran is supported by Harbor Homes’ services, including financial literacy training, and homebuyer education from NeighborWorks Southern N.H. Also, as Community Loan Fund borrowers, they'll have access to its Easy Assistance Program for confidential counseling and other help with the challenges of daily life.

The Community Loan Fund could make the special financing available because of its permanent capital donors, whose unrestricted gifts extend our reach and enable us to shape loans to the needs of low-income borrowers.

Other funders and partners for the Veterans First project include the Federal Home Loan Bank of Boston, Merrimack County Savings Bank, New Hampshire Housing Finance Authority, and the New Hampshire Charitable Foundation. Skyline Homes and Ironwood Building Construction innovated the design of these small homes with the encouragement of Next Step, a national partner focused on affordability and energy-efficiency in manufactured housing.

Julie McConnell, our longtime director of child care and community facilities lending, retired in style in April, when she was honored with a Nonprofit Impact Award from the N.H. Center for Nonprofits. She was recognized for her significant impact on early childhood education in the state as an advocate, lender, trainer, and mentor. That same week, she was honored with a proclamation from Gov. Chris Sununu and the Executive Council.

Vested for Growth, our business investment program, was named Business Assistance Organization of the Year by Business NH Magazine in its May 2019 issue. Honorees were chosen in 11 categories for their outstanding civic contributions and exceptional performance within their industry sector.

Community Loan Fund co-founder and emeritus board member Michael Swack (above, with his family) received the 2019 Ned Gramlich Lifetime Achievement Award for Responsible Finance from Opportunity Finance Network (OFN) in October. The Gramlich Award is the CDFI (community development financial institution) industry’s highest individual honor and was given in 2012 to Community Loan Fund President Juliana Eades. Swack is a professor at the University of New Hampshire, where he has appointments at the Carsey School of Public Policy and at the Peter T. Paul College of Business and Economics.

And in November our fearless leader, Juliana Eades, was named one of New Hampshire’s 200 most influential business leaders by the New Hampshire Business Review. NHBR called the Community Loan Fund a national model for “how to help people and institutions invest locally, preserve and improve manufactured housing as affordable housing, and using royalty financing to help local businesses grow.” Julie, who was selected in the area of financial services, said the most important business lesson she’s learned is “Do the best you can to support employees while balancing the interests of the individual and the organization.”

Have you seen our 2019 annual report, "heads & hearts"? View it here, or request a paper copy.