On the day before Thanksgiving, more than 1,000 homeowners in four New Hampshire mobile-home parks learned that their parks—meaning the land under their homes—would be sold.

The corporation that owned the parks planned to sell them to a Michigan company, the country’s third-largest park owner.

The homeowners, though, made different plans

On July 19, 2019, families in Tanglewood Cooperative in Keene, Bear View Crossing Cooperative in Allenstown, and Black Bear Village Cooperative in North Conway officially bought their communities. In doing so, they made their nearly 900 homes permanently affordable for working families with low and moderate incomes.

The fourth park sale did not go forward after discovering that 26 of its 138 home lots were either in a floodway or flood zone. 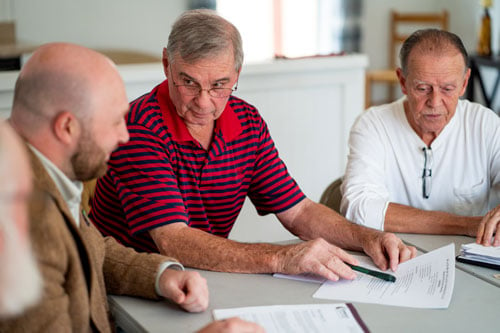 After receiving written notice of the proposed sales, homeowners in the parks used training and technical assistance from the Community Loan Fund’s ROC-NH™ team, to organize residents and form—or in Black Bear Village’s case, revive—cooperatives.

Each co-op elected a board of directors and worked closely with ROC-NH to make the purchase a reality.

The impacts of these ROC conversions are huge:

As they worked through numerous meetings and votes, many of the parks’ residents agreed with longtime Bear View Crossing resident Doris Corey, who stood up at a meeting and told her neighbors she’d been forced to walk away from her former home when the park closed so a grocery store could be built on the land.

“I WANT TO BE THE CAPTAIN OF MY OWN SHIP!” she said. “I want the final say about MY home, in MY park, and the only way that’s going to happen is if we own THIS park.”

“We need to do this, so we can put our futures in our own hands as opposed to the whim of somebody else who lives in the Midwest,” said Steve Porter, a Black Bear Village resident and Conway selectman.

After signing the closing documents, board members from the three co-ops that bought buying their parks said they felt free, confident, and masters of their own destinies.

Tom Moughan of Black Bear Village co-op, who was part of the unsuccessful effort to buy their park 10 years ago, took a generational view.

“We’re basically doing this for a lot of the younger folks in the park, so they’ll have low-income housing. It gives them a chance to own homes, and as they have kids and they grow if they want to move out they’ll have a better chance at selling their home in a cooperative community than if it was privately owned.”

The co-ops’ purchases of these three parks was of a scale unprecedented in the Community Loan Fund’s 36-year history, and required unique collaborations involving the park residents, town governments, state agencies, local and national funders, and impact investors.

Knowing that these homeowners already paid some of the highest lot rents (the fee for use of the land under their homes) in N.H., the Community Loan Fund and its partners sought to minimize rent increases.

Cooperative ownership means the homeowners in these parks are now eligible for products and services, including real mortgages, that haven’t been available to them. Studies show that the availability of home financing, when the land is secure, improves the home’s value, the owner’s ability to make improvements, and overall housing affordability.

The more-than-8,000 homeowners in New Hampshire’s ROCs, spread across every county, also have access to management guidance, technical assistance, and leadership trainings in which they earn college credit.

See a list of resident-owned cooperatives in New Hampshire.