Juliana Eades, who has created opportunities for disadvantaged people in New Hampshire for the past three decades, this week received the fifth annual Ned Gramlich Award for Responsible Finance. 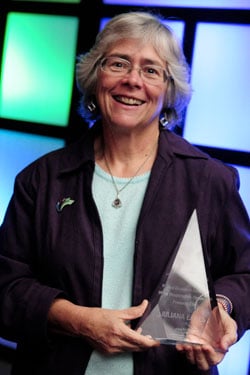 She was honored at the 2012 conference of the Opportunity Finance Network (OFN) in San Antonio, TX. OFN is the leading national network of high-performing Community Development Financial Institutions (CDFIs)

Eades is President and founding Executive Director of the New Hampshire Community Loan Fund. The Community Loan Fund, founded in 1983, was one of the first CDFIs in the nation. Based in Concord, the Community Loan Fund is a catalyst, leveraging financial, human, and civic resources to help traditionally underserved people. It provides financing and education or technical assistance to help people with low and moderate incomes achieve affordable housing, grow small businesses, and build or expand essential community facilities, like child care centers.

Eades was introduced at the OFN conference by Mary Rogier, President of the Northern California Community Loan Fund, who called her "a tireless entrepreneurial thinker and market innovator."

"Julie is driven by a deeply rooted belief that underprivileged people, families and communities should have access to the same opportunities as their more-fortunate neighbors. Julie has been quoted as saying, 'We want people with no pockets to be able to act like people with deep pockets,' " Rogier said.

"Nearly thirty years after helping to start a movement and taking on the leadership role she still holds today, Julie remains as thoughtful, as creative, as intellectually vibrant, and as committed as she has always been. The bottom line is, Julie has made a profound difference in the lives of people working to rise above poverty in New Hampshire and the entire country – and she still makes a difference, every single day."

The Gramlich Award for Responsible Finance is named for Ned Gramlich, a Federal Reserve Governor from 1997 through 2005. During that time, he oversaw the Consumer Advisory Council, which advised the Board of Governors on a wide range of community development and consumer finance policy matters. In that role, he was an outspoken voice on the risks of predatory lending, as well as strong defender of the Community Reinvestment Act. From October 2006 through his death in 2007, Gramlich served on the OFN board.

“Juliana Eades is a leader in the CDFI industry,” said Mark Pinsky, OFN's President and CEO. “As the founding executive director for the New Hampshire Community Loan Fund, Julie has creatively and relentlessly found ways to serve disadvantaged communities through responsible lending. She sets a high standard of performance and mission for all future industry leaders and CDFIs. I’m inspired by her commitment to this work, and I’m pleased to present her this award.”

“The Gramlich award is a humbling honor, and one that reflects the achievements and successes of a lot of people," Eades said. “Those who use our loans to seize opportunity, those who express their community values by investing their savings with us, the donors who support the education that comes with our loans, and a board and staff that constantly do more, better and smarter. Working for those groups has been an awesome responsibility and inspires me every day.”

Three years ago, the New Hampshire Community Loan Fund won the highest honor in the CDFI industry, the NEXT Award for Opportunity Finance, for its first-in-the-nation mortgage lending to owners of manufactured homes located in resident-owned communities.

Eades, a founding board member of OFN in 1985, received an honorary Doctorate of Humane Letters from Franklin Pierce College and the 2011 Horace Mann Spirit of Service Citizen’s Award from Antioch University New England. In addition, she was awarded the prestigious Granite State Award by the University of New Hampshire and was honored as the 2008 President’s Outstanding Woman of New Hampshire by Keene State College.

A 1994 graduate of Leadership New Hampshire, Eades has also served on the board of directors of the New Hampshire Charitable Foundation. She graduated from Swarthmore College in Pennsylvania and received her MBA from the University of New Hampshire.